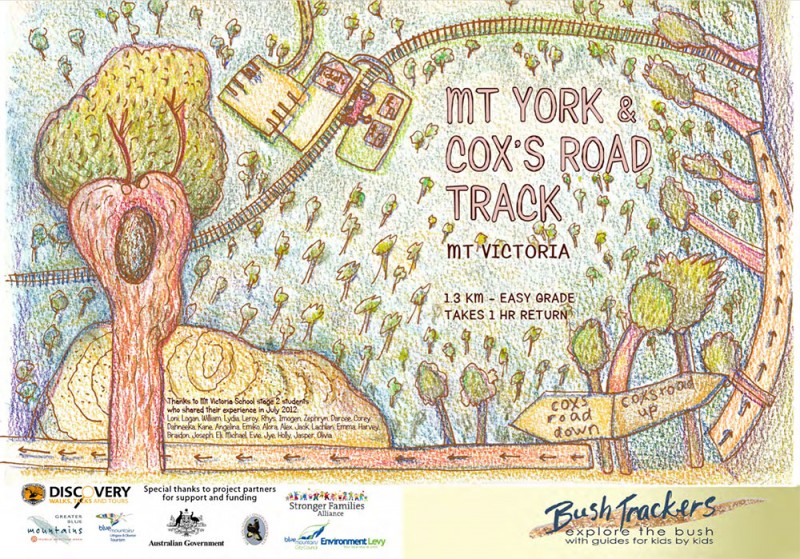 Children see things differently. Not only are they a little closer to the ground than your average adult, but so many of the things they encounter are being experienced for the first time.

With eyes wide open, their minds absorb every little detail.

So when Jacqueline Reid, from the National Parks and Wildlife Service, began working with schoolchildren to develop maps of some of the Blue Mountains’ most beloved bushwalks, she found herself infected with this magical wonder. The bush she had grown up in and spent much of her working life in had grown so familiar that she hardly noticed it any more. Seeing it through the eyes of children brought back that sense of wonder, and this is what makes the Bush Trackers initiative so unique. The program works with Stage 2 schoolchildren to develop bushwalking guides for children by children, and these guides are now available for families keen to explore the bush with younger children.

Bush Trackers was born four years ago, inspired by the Stronger Families Alliance and one of its key objectives, which is to create child-friendly communities. Jacqueline and colleagues began thinking about how they could get more children and parents outside and engaging with their natural environment.

“So we thought, why not get a bunch of kids and facilitate their learning about the environment and bush safety, and facilitate them to create something – a Bush Trackers guide,” says Jacqueline. She was granted funding from a Commonwealth grants program, and with support from partners the Blue Mountains Conservation Society and the Blue Mountains City Council, Bush Trackers was off and running.

In the program, groups of schoolchildren aged 8-10 spend a day walking a track, accompanied by teachers, Discovery rangers, and Jacqueline. They are each given an art diary containing a basic map of the walk, and at various points along the walk, encouraged to sit and take the time to draw or write their thoughts about something that captures their eye and their imagination.

“We slow it right down,” says Jacqueline. “We stop to smell the roses, so to speak; we touch the bark, we feel the different rocks and textures, we do a few bush games, like sitting in a magic spot and listening for 10 seconds.”

After the excursion, the children take their favourite artwork or piece of writing, or even photo, and continue to work on it back at school until they’re happy with it. Then the creations are given to Blue Mountains designers Paula Martin and Greg Somerville, who weave the children’s works into a beautiful bushwalking guide for that particular walk and by that particular school.

Jacqueline says the drawings are magical, and the children and schools have such a sense of pride and ownership over the finished product, which lists the school and students on the back of each map.

“We’ve printed close to 20,000 copies in the last four years – we’ve created 19 across the Greater Blue Mountains, and one in Lord Howe Island,” Jacqueline says.

The project has now received further funding to expand the initiative into the Penrith and Hawkesbury regions, and to develop a ‘train the trainer’ model. Jacqueline is also considering how to engage highschool and art students in the process. The children have responded so positively to the walk and art experience, with one child telling Jacqueline it was the best bushwalk they’d ever been on. And their enthusiasm infects the adults too.

“You get caught up in the day-to-day, but when you look at the stuff these kids have done, it’s beautiful – it brings back the magic.”

Bush tracker maps are available for two walks in the Blackheath area: the Mt York/Cox’s Road Track in Mt Victoria, and the Grand Canyon Track in Blackheath. Maps can be downloaded atwww.bushtrackers.com.au or you can pick them up from the NPWS office at the end of Govett’s Leap Road in Blackheath.