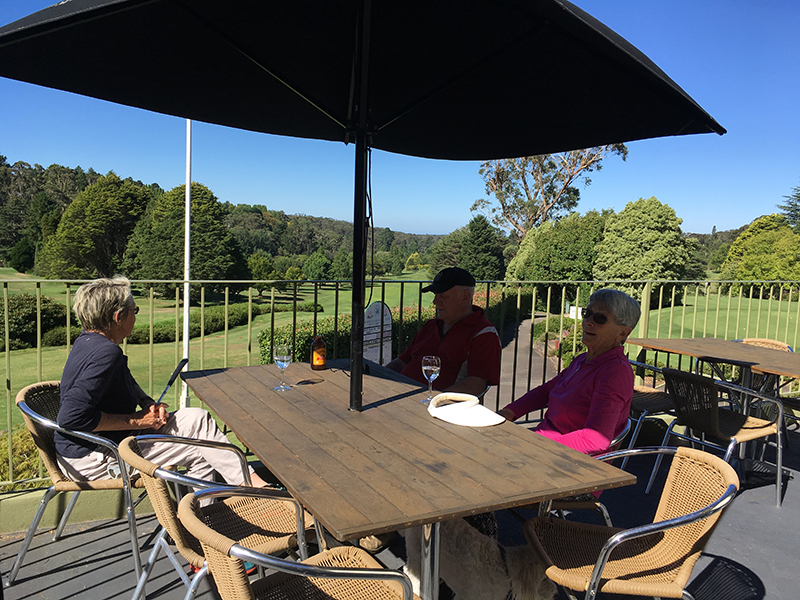 Sports psychologists and coaches frequently tell players that, when you’re challenged, you have the choice to respond to your situation by believing that your glass is half full, or that it’s half empty. For the enthusiastic new management team at the Blackheath Golf & Community Club, the glass is most definitely half full.

According to Board member Rodney Tubbs, “It’s no secret that golf, as a sport, is facing challenges world wide. The average age of club golfers has been increasing by one year every year.”

“The Mountains has already lost the Lawson and Katoomba courses, but we’re fortunate that our membership numbers are now increasing.”

Part of the reason for this turnaround was the decision last year to revision the Club as a Community Club as well as a Golf Club. With its new mission and name, the Blackheath Golf & Community Club has now expanded membership to include 690 social members, in addition to its many dedicated playing members. By offering social membership for only $15 per year, the Club is keen for the whole community to access its venue, which looks out onto one of the most picturesque golf courses in NSW, set against a spectacular World Heritage National Park backdrop.

The new President, Ian Foulsham, who’s been coming here to play for the last 36 years, describes it as “close to heaven!” As a social venue, it is one of Blackheath’s finest family-friendly community assets – offering affordable meals and employing local musicians to perform free concerts every Wednesday night. The Club has also started Junior Jam Thursdays, providing a venue for under 18’s to perform in front of an audience. It’s a great opportunity to hear new talent from 5 – 8pm Thursdays. Contact Rob on 4787 8406 to book in.

There are trivia and raffle nights on Sundays and the last Friday of the month, and charity events throughout the year. Rooms are available free of charge for community use. They’ve been used by reading, bridge, bingo, and dance groups; by the Rotary Club for its regular Thursday night dinner meeting; and by other community groups for comedy nights, film screenings, classes and more. The possibilities are endless.

There are plans to expand the outdoor entertainment deck and the Board is keen to hear from anyone interested in helping to organise a Courtesy Bus to pick up guests. This would be a boon for many older residents in particular, who aren’t able to drive, or for those who’d like a night out without worrying about whether they’ve had a drink or two.

As membership increases, so does business sponsorship … and, as a result, the number of places where members can now get discounts if they show their membership card will also increase. The Club’s entertaining newsletter reaches all members and provides an invaluable local networking tool. The Club has also started a Foundation, and benefactors, keen for the Club to thrive in Blackheath, have emerged to offer their generous support.

For anyone interested in trying golf for the first time, Ian Foulsham can’t praise it highly enough as a sport. “It’s a discipline in which you play against yourself. No one else really knows how you go. It’s selfish, satisfying and addictive!”

To help newcomers get started, the Club has a new and very congenial resident Pro-golfer, Darrin Walden, who’ll be providing coaching and clinics for young and old … and reminding everyone, I’m sure, that when the going gets tough, the glass is half full, not half empty!