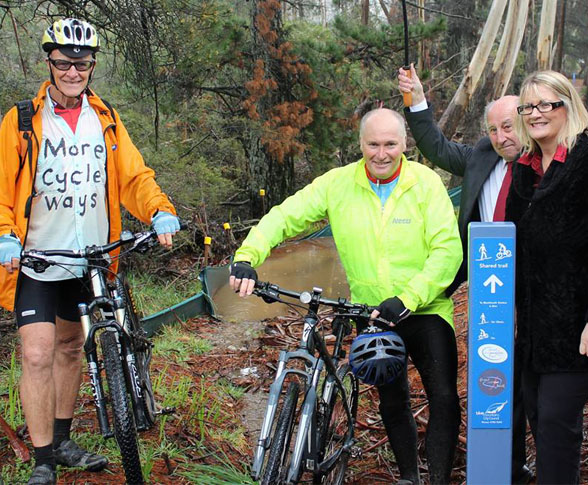 Passion, patience, persistence and the dogged determination of a handful of key champions, with a vision of building a Blue Mountains Bike Trail, finally paid off when the first section of the Great Blue Mountains

Clr McGregor was reported in the Blue Mountains Gazette as saying:

“The trail is a wonderful example of governments working together to boost tourism and economic development in the Blue Mountains region, as well as improve recreational and transport opportunities for local residents. This is the first step to realising a big idea – to develop an iconic, regional trail from east to west across the Blue Mountains ridgeline, accessible from all towns, villages and train stations along the way.”

While the key champions behind this project, from both Council and community, are thrilled that this first section has opened, they are now hard at work on the rest of the Great Blue Mountains Trail, which they are determined will eventually become part of a much greater vision – the Manly to Mudgee Trail.

The idea of a Trail beside rail was first proposed by Dr Katriona Herborn in 1982 but a community group, made up of climbers and cyclists, was galvanized to act in 1999, a year after a female cyclist crashed between Medlow Bath and Katoomba, fracturing a vertabra in her back. These cyclists were generally living in Blackheath and working in Katoomba and using their bikes to commute illegally. Around 2000, one of this group, Martin Krause, wrote an article in the Gazette and contacted councillors, BMCC and the local member. In response to this article, Don Newbury of Leura contacted Martin and helped him distribute and collate a petition which resulted in 1000 physical signatures (pre-internet days!) which were presented to Cr Terri Hamilton who presented the petition to Council on 9 May 2001. Council unanimously supported the petition.

While this was happening the group began to attract more supporters including Terry McCann (involved in mid and lower Mountains cycling advocacy), Tony Hunt of Winmalee (proposing the lower Mountains rail trail), Mark Weir (fire fighter) and Kevin from the bike shop in Katoomba. A website was set up and Rail Trails Australia also showed their support, even though it was a trail beside, rather than on, rail.

This was followed by great disappointment when many meetings and letters to the Gazette later the proposal was  rejected by both State and Federal Government. Blue Mountains City Council, however, agreed to include the proposal into their Bike Plan 2010.

While the Ministry of Transport rejected the proposal, it did agree to build 2m wide shoulders in each direction during the Great Western Highway upgrade. This opened the way to the large ‘footpaths’ on the newer section of the GWH, particularly in Wentworth Falls connecting to Tablelands Road and Andersons Fire Trail, Lawson, Hazelbrook and Woodford connecting to Oaks Fire Trail. It also led to cycle signage on Railway Pde between Lawson, Bullaburra and Wentworth Falls. The paths along the mid-Mountains highway close a loop with the Anderson’s fire trail.

Martin Krause continued lobbying local, state and federal government between 2001 and 2007, even though he had moved out of the Mountains. There has been strong lobbying before and during every election over the last 15 years.

In 2006, Janne Yardy and Glenn Sherlock from Blue Mountains City Council became engaged in the project. Glenn is a keen cyclist and continues to be one of the key champions of the trail, gaining State Government Metropolitan Greenspace funding for a feasibility study and putting in one grant application after another. A Council/Community working group was set up in 2006 with Martin Krause, Lis Bastian, Richard Delaney, Glenn Sherlock and Janne Yardy. There were suggestions of setting up a Trust, numerous articles were published in The Gazette and finally, without State Rail support, BMCC used its own engineers to survey a bike trail parallel to the highway.

In 2012 Lew Hird and the local guild promoted the trail from Wentworth Falls Lake to Mt Victoria as part of Bicentennial Crossing celebrations.

In 2013 the Federal Government committed $500,000 to BMCC to allow the construction of a basic trail between Katoomba and Medlow Bath. BMCC then used $60,000 of its own funds, as well as providing staff, to upgrade the track between Medlow Bath and Blackheath. They also supervised several work for the dole participants who also worked on it. This resulted in the fabulous trail, officially opened in August 2015.

In 2014, Suzanne Kowalski-Roth and Hereward Dundas Taylor and many members of the Blackheath and wider Blue Mountains community became involved with the GWH upgrade and Upper Mountains Rail Trail. Several meetings were held with the RMS, BMCC and Blue Mountains Tourism and the community mobilised to make submissions to the RMS for GWH upgrading to include cycling infrastructure. At a meeting the RMS stated that it was a record number of submissions, including children’s artwork!

Martin Krause also set up a Facebook page which gained over 2400 LIKES. An online petition he set up gained over 800 signatures and he met with the State Transport Minister to present the greater vision of the Manly to Mudgee trail.

In 2014 Rail Trails NSW came into existence and demonstrated interest in the Upper and Lower Mountains Rail Trail. At the 2014 State Election, all major parties provided a detailed policy outlining their commitment to the Trans Mountain Trail, RT and RMS upgrade to include cycling infrastructure.

“Council workers will next head to Leura for a section between the Mall and Leura Cascades, to be funded by a $150,000 state government grant through its Metropolitan Greenspace Program.” (Jennie Curtin, Blue Mountains Gazette, September 1, 2015)

WHAT YOU CAN DO

Bush Trackers Brings a Touch of Magic to Bushwalks