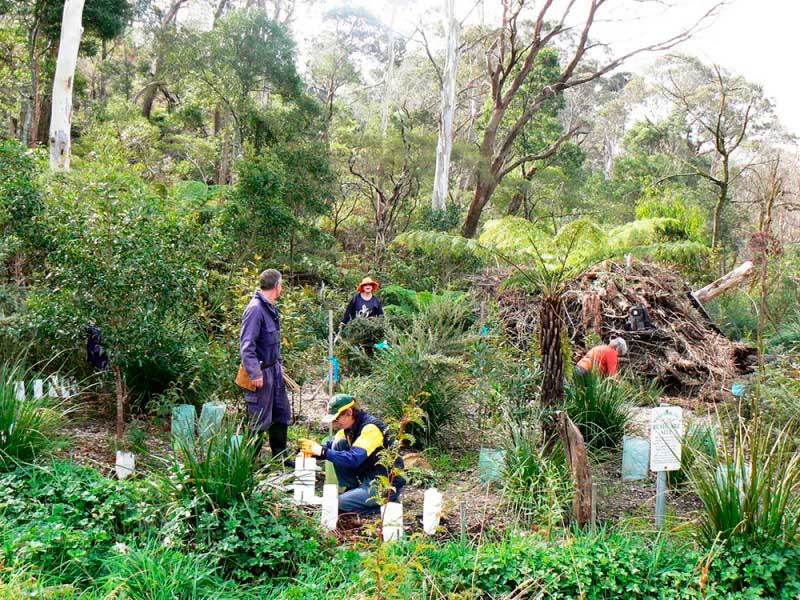 Popes Glen Creek rises in Memorial Park, close to the town centre of Blackheath, then flows east for about 4km through Popes Glen Bushland Reserve and into the Grose River.

Over decades this beautiful interface between the town and the Blue Mountains National Park had suffered the effects of polluted urban stormwater inundating a natural system, and had become a wasteland, devoid of native plants or animals … that is, until an inspiring group of volunteers, led by Alan Lane and Virginia King, decided to tackle what seemed like an insurmountable problem … and turned a wasteland into a wetland. Faced with the enormity of their task, and no precedents for dealing with a problem of this type, the volunteers had to literally break new ground and “learn by doing” in a process described as adaptive management.

This extraordinary community commitment, and what the volunteers learnt, has now been documented by Alan Lane in a new book “Decades of Healing” (the Popes Glen Bushcare Group Story).

As Alan and Virginia point out, “stormwater races down the surrounding roads and hard surfaces, changing the creek from a trickle to a torrent in minutes, causing erosion and carrying urban rubbish and silt.” The 1 ha of silt flat that formed at the headwaters of the creek filled with a forest of enormous Crack Willows under which other weeds, carried down from the gardens of Blackheath, proliferated – Privet, Blackberry, English Ivy, Japanese Honeysuckle and Radiata Pine. These weeds destroyed the habitat for native vegetation, birds and frogs.

So, how did they do it, and what did they learn in the process?  Here are Alan Lane and Virginia King’s tips for a project of this sort:

Seven Ways to Bite off More than You Can Chew

A group tackling a long-term project needs critical mass in its membership to finish what it begins. The Popes Glen Bushcare Group (PGBG) was formed in 1992 as one of the first community groups to join the Blue Mountains City Council (BMCC) Bushcare Network. By 2002 when the willow project began, the group had a track record of successful weed removal in other sections of the site, and a long and productive partnership with BMCC. This history made it possible not only to attract more volunteers for both regular and special work days, but also funding from granting bodies when needed.

The broad goal was to replace the willow forest and other weeds on the silt flat with native wetland plants. This seemed a daunting task because the weeds – especially the huge willows – could not be removed without the risk of destabilising the silt flat and headwall. So work began on something manageable – finding suitable replacement plants of local provenance that were happy in a moist environment.

The group planted out four experimental plots at different places within the silt flat, using a grant of $2000 from the Urban Runoff Control Program. The successful species – including gahnias, leptospermums, carex and blechnum ferns – were then progressively planted under the willows amidst the other weeds. Gradually, over an initial four-year period the understorey was cleared in sections as intensive planting continued. Hundreds of hours of weeding and maintenance protected the new plantings from the encroachment of the weeds.

The Popes Glen project was founded on a “learn as you go” process because the site and its problems were unique.

The silt flat needed to be protected by plants with long and extensive roots. To begin the planting program, long-stem plantings were tried, after great success in other sites such as the Colo River. But after three attempts where the plants all died, long-stem plantings were abandoned and only ordinary tube stock was used. It was later discovered that the high water table was responsible for choking oxygen from the long-stems.

A local tree species was sought to replace the willows. Blackwood (Acacia melanoxylon) seemed perfect – it favours deep, moist soils and has a vigorous and extensive root system. But when most of the plantings failed within a short time, a detailed experiment was undertaken to discover why. Were the young trees being eaten by animals or insects, or was the habitat unsuitable for some reason? The main culprit turned out to be swamp wallabies!

Each stage in the process brought new and unexpected challenges. The silt bed needed to be stabilised throughout the rehabilitation, so weed removal and re-planting were done in patches across the site. While this was going on, the group experimented with ways to manage storm flows from the creek. As selected willows were poisoned and felled, the volunteers used their trunks and branches to create structures on the creek banks and across the silt flat to disperse the flow of water. It was exciting to see how these structures soon disappeared into the landscape as they were colonised by native wetland sedges.

Five: Bring in the Experts

The torrent in the creek during rain needed to be managed to prevent erosion of the banks and silt flat and the destruction of the new plantings. The volunteers attempted to achieve this by building a weir across the creek. They tried several times but each effort was demolished by stormwater. Eventually professionals were brought in. Their weir – built from coir logs fastened deep down with stakes and protected by railway sleepers and rocks – withstood the power of stormwater.

When the volunteers began the long process of poisoning each willow, they worked in pairs using a hammer and chisel to make up to 200 cuts around each multi-stemmed trunk and a dropper bottle to put a tiny amount of herbicide into each cut – a process that could take up to 1½ hrs per tree! But contractors engaged under a grant from the Environmental Trust were able to do the job in a fraction of the time using chain saws and hand pumps.

The biggest task – stabilising the headwall – was too difficult and too specialised for the volunteers, even with Council support. So a team of expert contractors was engaged, paid for with a significant grant from the Environmental Trust. They first cleared the headwall of weeds – during winter when storm surges are minimal – then killed the mature willows, leaving them to be felled later. The next step was to protect the headwall from erosion and possible collapse by building a massive structure from recycled railway sleepers and rocks. Suitable wetland plantings assisted the natural regeneration of the vegetation.

Felling the willows opened the canopy and allowed light to reach the ground. This was perfect for encouraging the new plantings to thrive but had an unforeseen downside – an explosion of a new weed: Creeping Buttercup. Volunteers spent hundreds of hours hand-weeding the carpet of buttercup because herbicides could not be used in the aquatic environment. But eventually the group was forced to admit defeat. They stopped trying to control the buttercup and put their energy into continuing to remove the willows and replanting the silt. That was when serendipity intervened. As the water levels rose across the silt flat – the result of their measures to manage storm water flows – the buttercup was drowned and replaced by lovely dense meadows of a native sedge, Carex gaudichaudiana.

Seven: Write it Down

An essential part of ‘adaptive management’ is keeping rigorous records of every step on the way – every trial and experiment, every success and failure. The PGBG volunteers have kept a detailed photo-history of the project and have monitored the effects of their work by measuring everything they could – waterbugs, water quality, planting experiments, native and weed vegetation, birds and frogs – as the site returned to health.

Popes Glen Bushcare Group has created a native wetland from an environmental wasteland. Frogs and birds are back. Native swamp vegetation is thriving. Water quality has improved. The work continues …

You can see more of the work of the Popes Glen Bushcare Group and download a free e-book here.

If you’d like to volunteer a few hours of your time, Popes Glen Bushcare Group meets on the fourth Saturday of each month from 9 am – 1pm (or part thereof). Contact co-ordinator Alan Lane: alanlane388@gmail.com