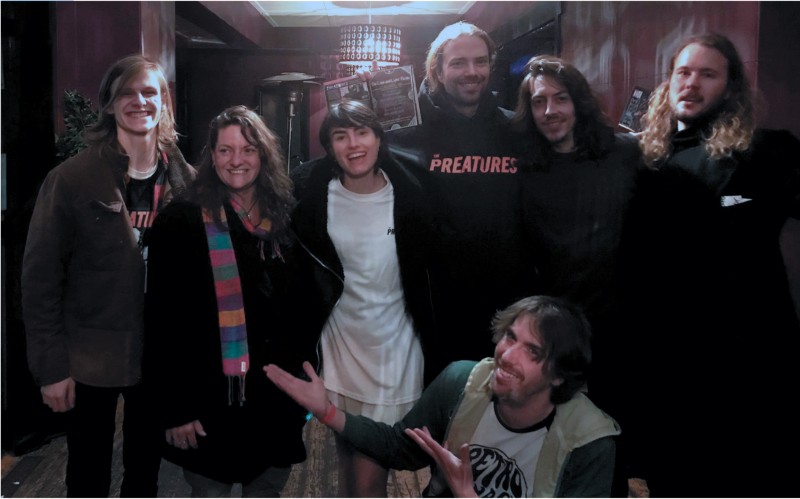 To celebrate #NAIDOCWeek2021, and with nostalgia for a pre-Covid time, we’re reprinting this fabulous article by young Blackheathen Annabel Pettit, advocating for us all to be speaking, hearing and acknowledging Indigenous languages as a part of our collective Australian history.

“Tell me how it was in the beginning of our land, We’re like in the Dreamtime, shedding our skin again

Yanada is Dharug for moon, and is the title of the lead single off The Preatures’ second album ‘Girlhood’. Isabella Manfredi (or Izzi) of The Preatures performed Yanada on the 28th of June 2018, as part of an electric show at the Hotal Gearin in Katoomba, where a jubilant, receptive and chaotic Mountains crowd sang along with every word. Amidst such a party, it would be easy to forget the months of community consultation that led up to this moment as Izzi sang Yanada.

As part of this consultation, a co-writer and mentor was Darug songwoman and Blue Mountains local, Jacinta Tobin! Jacinta is a teacher of Dharug and in 2001 released her own CD, ‘Yarramundi and the Four Leaf Clover’. But what kind of complexities arise when a non-Indigenous person sings in languages? Well, Jacinta argues that there shouldn’t really be any, since we all already speak Dharug, oftentimes without even being aware of it. Bondi, boogie board, Coogee, are all Dharug words. Bondi is derived from ‘bundi’ meaning ‘the hard wave’, boogie is ‘to bathe or swim’ and Coogee means ‘the place of rotting seaweed’. Interviewed by Marc Fennell for SBS’s The Feed, Jacinta said: “Who’s telling me I can’t share my language? Who asked the French when we all learnt Frére Jacques at school?” Touché!

For The Preatures, the road to Yanada began after Izzi felt a desire to learn more about the land she lives on in Sydney. She was inspired by the work of Wiradjuri/Kamilaroi artist Jonathan Jones, as well as the theatre adaptation of Kate Grenville’s The Secret River, the story of the relationship between a white convict family and an Indigenous woman whose land they steal. Izzi was moved by hearing the Indigenous cast members speaking entirely in Dharug. She tells Triple J: “I didn’t understand any of the language, but it hit me in a place and the sound of the language moved in me, like a fish in water.”

Jacinta shares a connection with The Secret River, as a descendant of Yarramundi, the man who inspired her album as well as Kate Grenville’s novel. So when members of the play’s Indigenous cast were being unsettled by unusual weather patterns and persistent rain every show, Jacinta and Aunty Carol Cooper were called down to the Theatre Company to perform and bring with them white ochre from the country, their visit bringing the rain to an end. This story would come to inspire Izzi, who by this point was already singing the melody of what was to become Yanada. She also knew the story she wanted to tell – about a maternal relationship between an older woman and a young girl. This, she then realised, was an Indigenous story, requiring an Indigenous voice. A cultural consultant for Bangarra Dance Theatre put Izzi in touch with Jacinta, or as Jacinta put it: “I was doing language courses in Sydney, then Izzi came into one of my classes and I kidnapped her up the mountain.” Collaborating in her Blue Mountains home one day, Jacinta recognised Dharug in the made-up words Izzi was using for her melody, telling The Guardian: “Language was just trying to come out of her mouth.” It sounded to Jacinta like Izzi was singing ‘yanada’ – moon.

This must have been the key for Izzi – apparently she burst into happy tears at this discovery! The song certainly seems to complement the introspective album ‘Girlhood’. Although in Dreamtime the moon is sometimes male or female, depending on the story and country, it holds strong Celtic associations with femininity and transformation. You could create links between the meaningful symbolism behind Yanada, and the themes Manfredi was exploring through ‘Girlhood’ – the omnipresence, strength and transformative powers of women and the moon. The moon has long been a muse for creatives – Izzi shared this D.H Lawrence quote to her social media: “The moon is a great nerve centre from which we quiver forever.”

Izzi told Triple J that Yanada is about “doing something out of your comfort zone that leads you to a different way of knowing and understanding the world”. How did The Preatures manage to leave their own comfort zone in the creation of Yanada without imposing on someone else’s? How does the respectful intention of a piece like this shine through, and when would it become cultural appropriation? For The Preatures the answers to these questions seem to always be in consultation, collaboration and ensuring that the whole process is a cultural exchange, “rather than taking without understanding”.

For although, as Jacinta argued, Dharug is a language free to be shared and spoken, and the elders that Jacinta and Izzi had consulted with were fully supportive of The Preatures’ work, Jacinta told SBS Viceland how she still needed to consult with spirit before going ahead with the song. She explained how the eagle is the highest lore man, and so, when an eagle showed itself to her, it “signed the document”. It was a sign that spirit approved, that “the ancestors were happy for the song to go ahead”.

His significance was made even greater by the fact that he flew up ahead while Jacinta was in Richmond, on Yarramundi’s land. Though it was a tense few days for the band, the process of waiting for the eagle to show himself to her was vital for Jacinta, who sought to clarify her purpose in a situation that had become very political, and for some, had reawakened painful discussions. This process also reaffirms that every decision Jacinta made throughout her collaboration with The Preatures was never a result of ego or any other ulterior motive like money – but that she was acting with a full awareness of kinship and the responsibility that comes with it, as well as with a deep connection to the collective consciousness of the land.

Ensuring that their work with Indigenous communities was first and foremost an exchange, The Preatures ran a fundraiser to support the Australian Institute of Aboriginal and Torres Strait Islander Studies (AIATSIS), focusing on the re-issuing and free redistribution of Professor Jakelin Troy’s book on Dharug, ‘The Sydney Language’. The AIATSIS documents Indigenous languages, with the largest archive of song cycles in the world. These song cycles hold information on indigenous history, relationships, care for country and lore philosophy (Jacinta explains that lore philosophy is to love, observe, respect and educate). Despite this impressive collection, less than 10% of Australia’s languages are comprehensively documented. Over 250 Indigenous language groups covered Australia prior to European colonisation, yet today only 120 are still spoken. 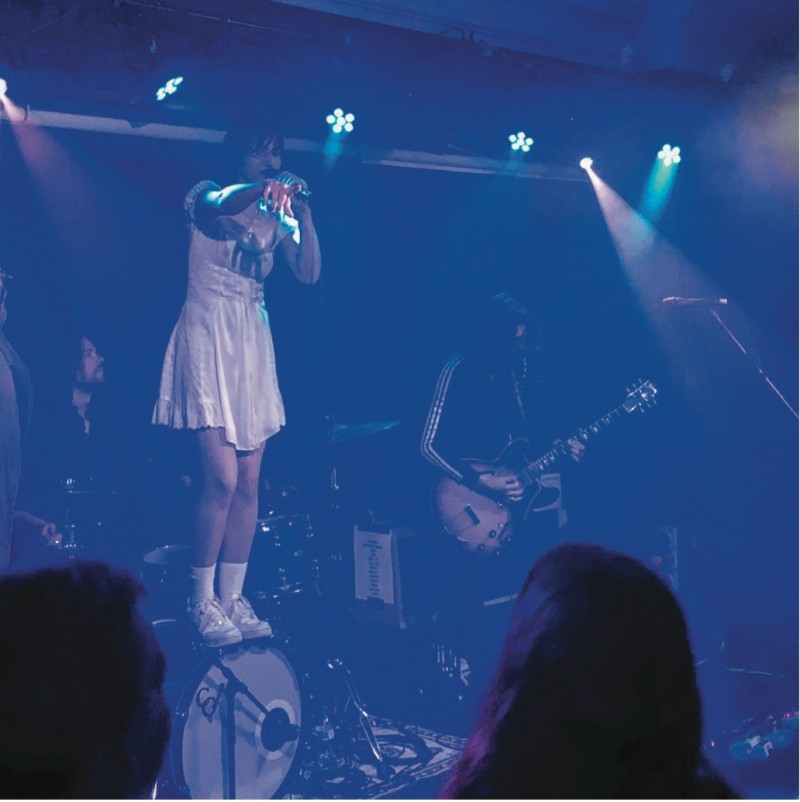 For Izzi, who grew up listening to bands like Yothu Yindi and the Warumpi Band, this need for language revitalisation lies at the heart of her purpose through Yanada. It’s why she advocates for us all to be speaking Indigenous languages, to be hearing them on the radio and acknowledging them as a part of our collective Australian history, telling The Guardian: “Indigenous languages have been systematically oppressed in this country. Now they’re in danger of disappearing.” In his 2014 address to the National Press Club entitled ‘Before It’s Too Late – A Call to Secure Australia’s Indigenous Heritage’, Chair of the AIATSIS Mick Dodson quoted W.C Wentworth’s letter to the then PM Robert Menzies, writing: “If we do not undertake it [preservation of Indigenous culture] now, humanity will lose something of permanent value, and we Australians will lay ourselves [open] to perpetual reproach.” Or as Jacinta told The Guardian: “If the language isn’t spoken, then it simply doesn’t exist.” Though later she beautifully rephrased this statement, explaining how the languages are stored in the land, that “the water will always remember the language” even if we forget it. By speaking and singing in languages, we are massaging the land, encouraging the language to live again through us. Along with it, we’d be reawakening Indigenous values of care for land, which we all need to embrace. So what The Preatures are doing by singing in Dharug, as Jacinta explains, is vibing that same ancient Indigenous frequency and transmitting it out to us all as a reminder of this collective responsibility.

So let’s hope that having The Preatures sing Yanada at the Hotel Gearin is a sign of things to come. Not only that we will experience a greater exposure to indigenous languages, but that Katoomba will host more regional tours of big bands! Last year, Retro Rehash host Willem Hendriksen started a local campaign to get King Gizzard and the Lizard Wizard to come and play in Katoomba. More widely though it was a call to put Katoomba on the map as a desirable destination for bigger tours, for these groups to meet with rural creatives and young locals like Reyhn, Sarah and Hannah!

“Their show was absolutely electrifying. They were so tight and had a great stage presence. They really made the gig a party. I hope we get more touring bands out here so they can bring their music to a new audience and gain a bigger following” – Reyhn, 18

“Everyone was just dancing the whole time, and there was a huge encore … it’s such a community force, when we have people come here and play for us and without charging a fortune … it means the world to us.” – Sarah, 19

“It was amazing to have such a well known band come and play in a smaller venue, especially a place so familiar to us … they played with such a powerful energy which electrified the audience … it was a great night.”– Hannah, 18