On the edge of the Simpson Desert, 35 km from the nearest town, lies the bed of an ancient, dried-out lake which every July becomes home to the Big Red Bash, the largest remote music festival in the world. The festival has featured well-known artists such as Paul Kelly, Jimmy Barnes and Missy Higgins. Now coming into its seventh year, the Big Red Bash sees around 9,000 campers make the trip to ‘Bashville’, two days drive from Brisbane and two and a half from Sydney.

For those campers, it’s easy not to realise the planning involved with making an event of this size go off without a hitch. The site has to be designed to give easy access to facilities. Water and food has to be trucked in, rubbish and waste trucked out. Electricity has to be generated, volunteers organised, risks and hazards identified and mitigated. Event management is a logistics problem with a thousand variables, and that’s the job of the Event Director, Lucas Trihey, and his team at Event Safety Services (ESS).

Lucas Trihey has been involved in the adventure industry since 1986, being at times an expeditioner, photo-journalist, guide, teacher, publisher, editor and consultant. Through the skills he learned on his personal adventures, and as a climbing trainer, Trihey found work on the sets of films, documentaries and TV programs such as ‘Wild Australia – The Edge’ where he worked as climbing coordinator starting in 1994. Trihey’s work in this area involved managing an “ever-growing pool of casuals to come and set up ropes, camps, carry film gear and guide film crews through canyons and in cliff areas”.

In 1997, Trihey was asked to form the Australian climbing and safety team for the Australian Eco-Challenge in Cairns. Through this event he made contact with The North Face 100 (now Ultra-Trail Australia or UTA), a 100 km trail running event through Blue Mountains National Park. Trihey is now the medical team director of UTA, overseeing 5,000 participants and a staff of over 60 doctors and nurses.

In 2006, Trihey became the first non-Indigenous person to walk unsupported across the Simpson Desert, through its geographical centre and away from vehicle tracks. For 17 days he carried all his food and water in a two-wheeled cart, from East Bore on the Western edge, to Birdsville in the East, a distance of over 400 km.

Now Trihey and ESS are bringing together everything he learnt on that walk to provide support services and management for events in remote areas. In the case of the Big Red Bash, ESS manages nearly every aspect of the festival, the planning for which can take the better part of a year. This includes site layout, risk management, first aid, organisation of food vendors, potable and wastewater transportation, electricity generation, coordination of 450 volunteers and radio and satellite communication in an area without mobile reception.

Trihey is always looking for ways to update traditional event management strategies and, in doing so, expose over 9,000 campers to environmentally-friendly alternatives. “We’re not preaching, just showing,” says Lucas, who is currently recycling 10 cubic meters of aluminium cans from the concert area alone. The cans are crushed and sold at a recycling centre in Dubbo rather than entering landfill. Now he’s looking at alternatives for dealing with waste removal, through the use of composting toilets.

At previous Big Red Bash concerts, the typical waste solution was to use chemical toilets, the kind seen at events and construction sites the world over. Each year 100,000 liters of water were brought onto the site for flushing, and 120,000 liters of liquid waste were removed to be processed at the Birdsville treatment plant, 35 km away.

This year, for the first time, these chemical toilets were replaced by 160 composting toilets. Instead of flushing, the composting toilet drops waste matter into standard 240L wheelie bins. After each use, a cup of sawdust, provided in tubs in each cubicle, is enough to prevent the majority of odors. “The public reaction was guarded at first. But when people saw them and used them, they loved the loos.” Trihey even found that they received less complaints than their chemical counterparts.

After the event, the toilet frames were packed up, ready to be used for the next event, while the bins were fenced off and left on site for 8 months to decompose. Trihey related his experience coming back and lifting the lids, being amazed at the lack of any smell: “It’s unbelievable, the natural composting process happens so fast.” The toilets don’t require water, chemicals or further treatment once the composting process is complete: “You’re left with a rich, fibrous, carbon-neutral compost.”

Now, Trihey is working on his own design for a composting toilet, inspired by the permaculture organisation Milkwood and in collaboration with Ascent Consulting Engineers in Blackheath. During my interview I was able to see the recently completed prototype of the new design, with metal fabrication by Peter Hodgkinson, assembled in Trihey’s own backyard. The design is relatively simple, using a frame of galvanised steel, vinyl siding and a plywood seat and floor making it light, strong and able to be flat packed for easy transportation. 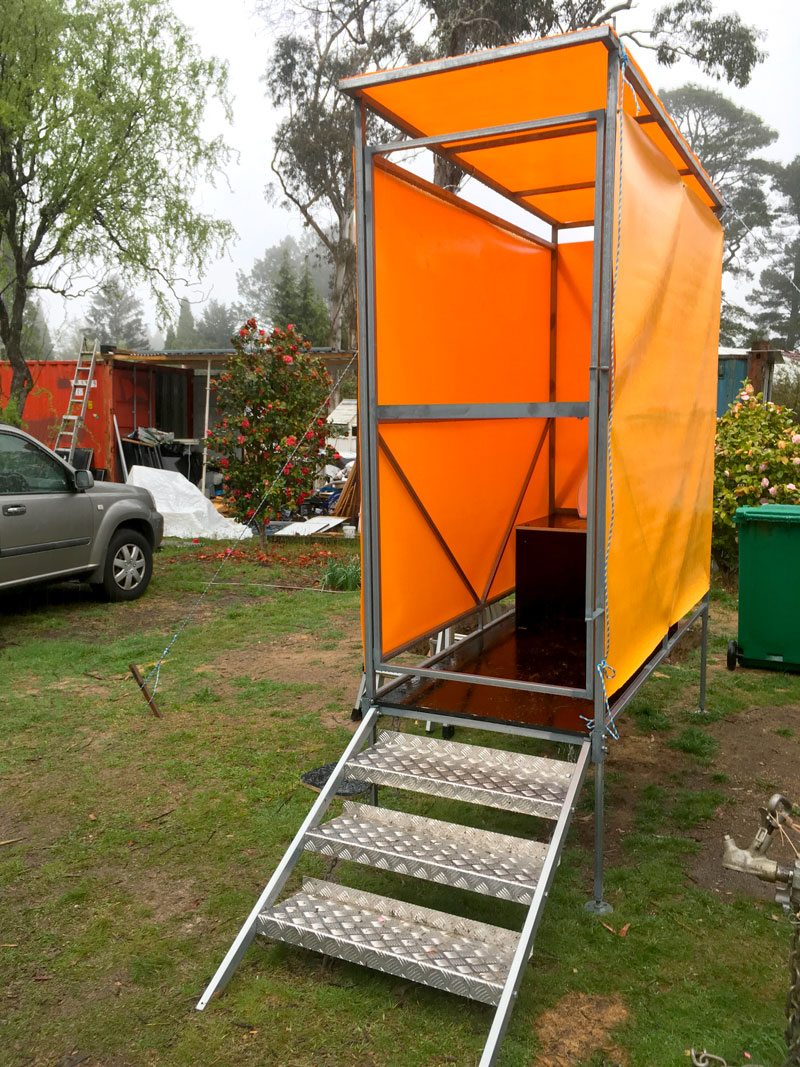 With the design complete, Trihey thinks it will probably be another year to get tests done and sort out legal compliance needs, after which he hopes to rent the toilets out to smaller, local events. “Whenever I see a plastic portaloo, I think, that could be a composting loo.”

To some, Lucas Trihey’s success may look like luck, the chance encounters that led him from his passion to a fulfilling career, but in the words of Louis Pasteur: “Chance favors the prepared mind.” Trihey put a lot of emphasis on building skills and experience: “Do what it takes to build your experience so you’re able to make good decisions … it takes passion and hard work.”

Trihey and his team have already begun work on the seventh Big Red Bash to be held 9–11 July 2019.