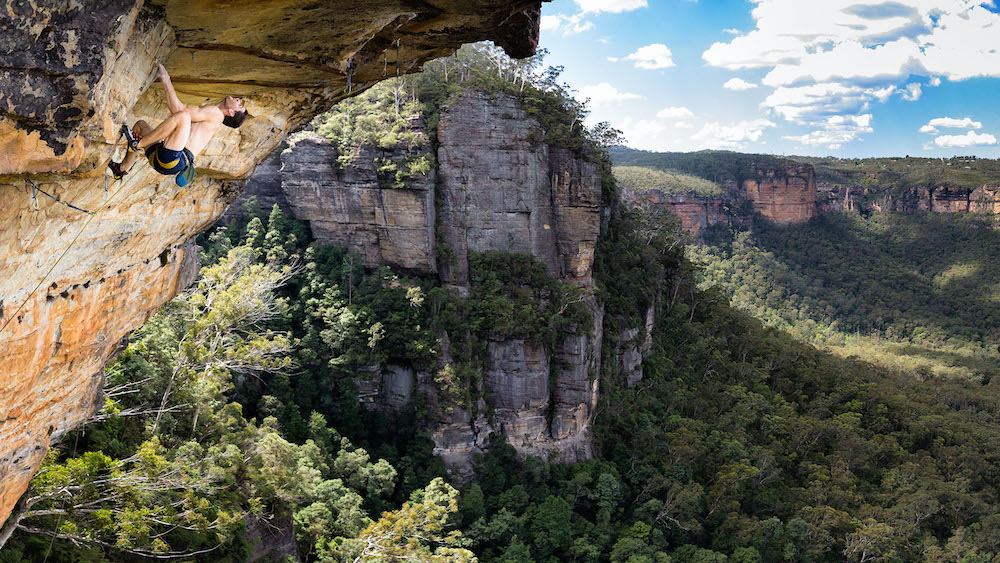 Rock climber Tom O’Halloran came to Blackheath to climb. He discovered here a sense of freedom and inner calm which has propelled him to the top of international Sport Climbing and to selection in the Australian team for the Tokyo Olympic Games.

Tom and Oceana Mackenzie will represent Australia when the sport makes its debut in Tokyo, and Tom has one clear goal.

“I compete to win. I’ve never been in a comp I didn’t want to win. I’m a competitive person and I want to get in and show what Australia has got. I’m going to climb my best and I’ll be stoked if I can get through to the finals and stand on the podium, that would be very special.”

Tom finished fifth at the 2019 World Championships and believes he carries less expectation into the games than many of his rivals.

“A lot of the more well-known climbers in Tokyo have a lot on the line, and this could create crippling pressure for them, but not for me. At Tokyo, I think to a degree I’ll be an underdog because a lot of the other climbers don’t know much about me.” 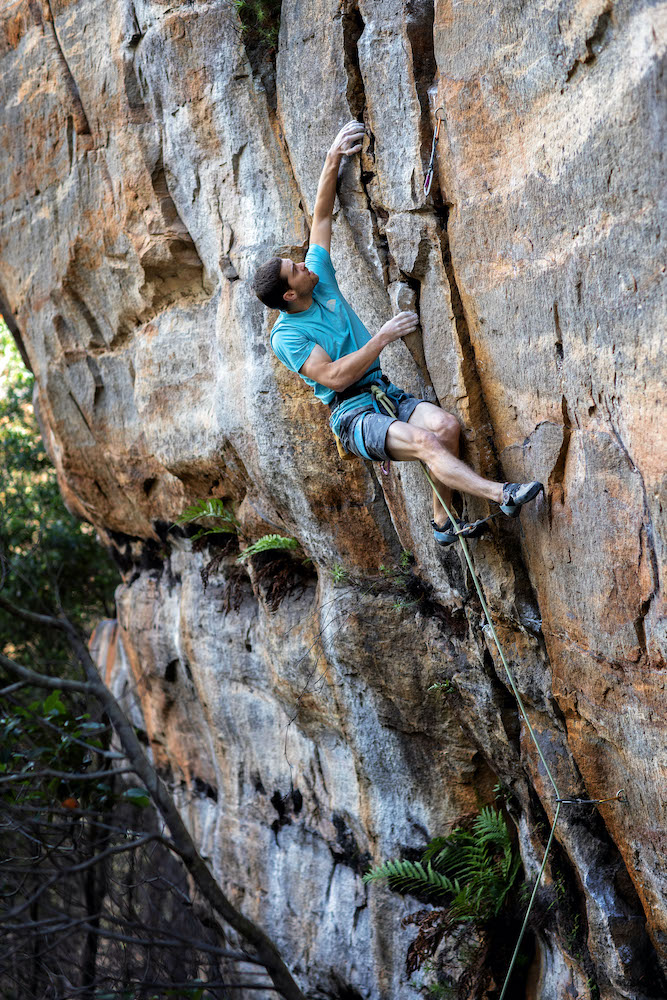 Tom loves outdoor climbing, and switched to the three indoor disciplines quite recently after deciding to commit to competition.

“As a climber, I never won a competition as a junior at national championships. I was actually uninspired by competitive climbing until recently, because I love outdoor climbing. I was happy to give indoor climbing a miss because I didn’t want to give up outdoor climbing which I enjoy, and which I find fulfilling because I can do it with my family, even my young daughter who’s a climber.

Then, in 2019, my partner Amanda, who I met here in Blackheath through climbing, said ‘let’s do it. Let’s make a commitment to indoor climbing’. So, in 2019 I committed myself to competition. Amanda told me that if I didn’t try competitive climbing, I might regret it.”

Calmness and freeness are traits of Tom’s climbing and personality. Traits he hopes will carry him onto the podium in Tokyo.

“I search for a freeness in my climbing. I try to feel open and free. It’s a space I was able to find just before the qualifiers. When I find this freeness, I climb my best. I try to let it be and I try to access that space and to switch off from anything else. 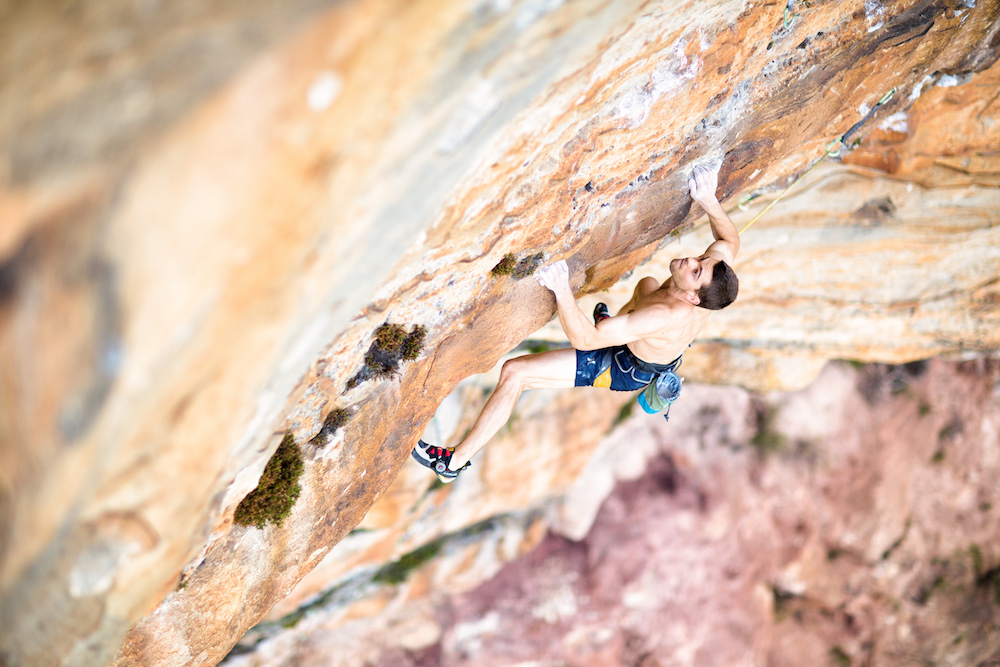 I always try to find my own space within the chaos, even among all the COVID disruption. I might listen to music or meditate to block out the noise, and just step aside. I always want to have fun, go climbing and do my best. I try to let it happen. I think you can’t manufacture a head space before competing, it has to come naturally, I have to be naturally fired up.”

Tom credits his partner and the strength of his family with his rise to the Olympic team, and for the balance that is required to succeed in elite sport.

“With COVID it definitely took longer to find that head space than I would like. Amanda and I always strive to strip away any unnecessary pressure, any unnecessary stuff and worries. We are always simplifying things, and I make sure I go with the flow. I also work really hard at the same time, but I do have a tendency to err on the side of going with the flow, to the point of laziness,” he laughs. “Amanda is really good at firing me up for competitions. We complement each other well.”

“Ultimately, for us the family unit is very strong, and if the family unit is strong, we’re all good. I have a 7-year-old daughter who climbs and goes to Blackheath public. She loves the school, and she loves her teachers so much she wants to be a teacher one day.”

When Tom first started climbing in some local competitions in 2004, Sport Climbing’s inclusion into the Olympic Games was just a rumour, a possibility. Now, the boy from Blackheath via Brisbane has a realistic chance of winning the first ever Sport Climbing gold medal at an Olympic Games.

Tom has always strived to be a strong all-round climber, and he secured the one available qualifying spot with victory at the Oceania Championships courtesy of a consistent performance across all three disciplines. He finished second in Lead, Speed and Bouldering, and scored the lowest overall ranking, which is how the medallists will be decided at the Olympic Games.

“It’s going to be an absolutely wild ride,” he says of the competition in Tokyo. “It will be exciting for spectators because one climber can up-end the entire competition. It’s wild. There are so many possible scenarios, so it’s exciting and a great spectator sport.”

Speed climbing is like the 100m sprint. It’s explosive and simple: fastest climber to the top of the 15-metre wall.

“Bouldering is a real head game, like a game of chess, plus some severe physical problem solving, and it’s an entirely different physiological challenge to speed climbing. Then lead climbing is a different challenge again.

Most climbers are specialists. The best speed climbers in the world are usually terrible at lead or bouldering, and we’ve all had to adapt. It will be awesome to see the best in the world across a range of disciplines.”

Tom grew up in Brisbane and has called the Blue Mountains home since he was 19. He was asked a very simple question,

Did you move to Blackheath because of climbing? 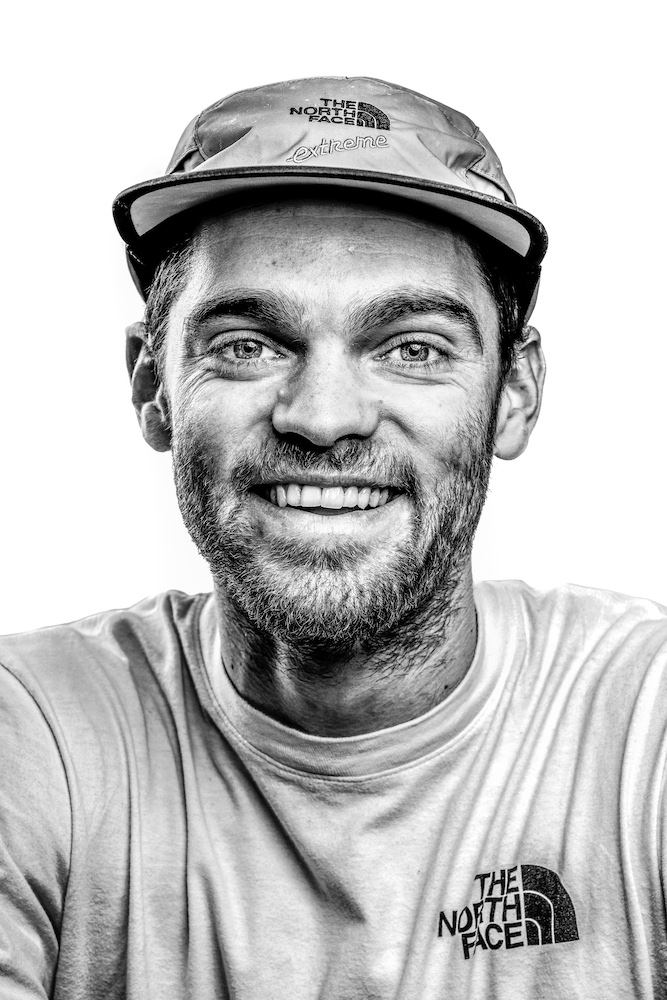 “I’d visited as a kid on family holidays and done some climbing here. We’d climb, then have lunch at the Victory café, but I never thought that would one day become my local.

I met some guys from Blackheath once when I was climbing in South Africa. They told me about all the great climbing here, so I moved down when I was 19. I deferred uni and came to Blackheath to climb. I didn’t know many people here, and I thought I’d just have an extended holiday, climb, work, travel, see how it goes, then go back to uni.

Then I fell in love with climbing and decided to stay here permanently. I thought I might have to camp in a tent at first but someone I knew had a spare room, and now a decade later I’m still here.”

Climbing was and still is central to Tom’s life, and that of his family.

“I worked in a proper job as a rigger and rope access technician, but I got sick of waiting for the weekend, so I created a work situation that gave me the flexibility to climb. My wife does the same. She set up her own nutrition/dietetics business to be able to go climbing. There are probably only 3 rock climbers in the world with proper jobs,” he jokes.

The Blue Mountains are famous for climbing, hiking, camping and outdoor pursuits, but what is it about Blackheath that has produced one Olympian and a steady stream of passionate rock climbers?

“I can walk to some of the best climbing in the world just 10 minutes from my backyard,” Tom states simply.

“Also, Blackheath is not out in the sticks, so there’s so much opportunity. You can still go to the city and have that city life while having awesome climbing on your doorstep.”

The people Tom has met and continues to climb with have also helped him reach the top of the sport (and possibly even higher).

“World class climbing walls also bring people together. We share ideas and that’s developed the climbing in the region. It’s a real melting pot of people and that makes it the best place to be.”

What about climbing in Blackheath in winter?

“Yeah, it does get pretty cold, but that’s good sometimes. The cold scares people away and we have the rocks to ourselves. We have a few tricks for staying warm. We wear the right jacket, we put heat packs in our chalk bags and we chase the sun on certain walls. The low humidity up here creates more friction on the rock which is better for climbing, and we love to hang out in the sun.”

Blackheath Bowlo offers a space to climb indoors, and Tom’s basement is now a personal climbing gym, where he continued his training during the various COVID lockdowns.

The humble village at the top of the mountains offers Tom more than just world class climbing walls, including benefits that are less tangible but just as important.

“Blackheath has everything. It’s close to the capital and it has a great connection to the environment. Everyone who lives here seems to have that connection as well, whether they’re mountain bikers, artists, rock climbers. It’s an incredible group of people who live here which is super diverse. It feels like we’re all kicking at the same goal posts with a respect for the natural environment.

The sense of community is also very strong here. This was really obvious during the bushfires. Everyone helped each other, even people we’d never spoken to before, everyone came together to keep the fires away. We can also see now that people are doing their part to shop local, and it’s part of that community feeling you don’t get in bigger towns or cities.”

Tom is about to embark on the adventure of a lifetime, competing in the world’s greatest sporting event, knowing full well what is waiting for him at home.

“I remember when I lived in Brisbane, I would come back from travelling and from climbing trips and I would feel this post-travel let down. But Blackheath is an amazing place to come home to, it’s like being on holiday living here.”