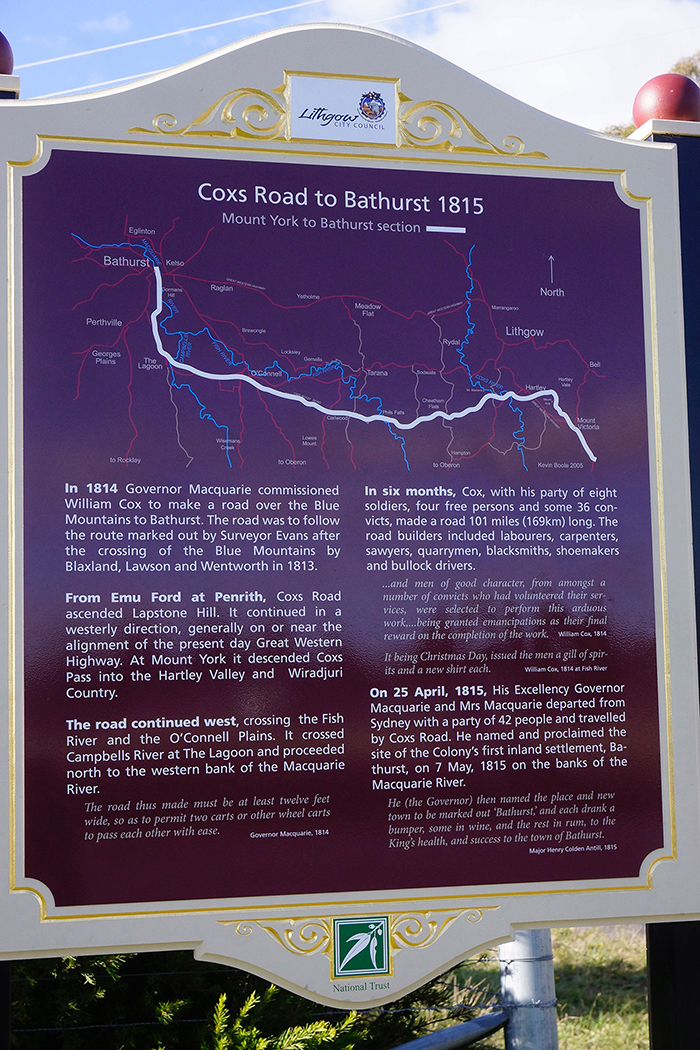 In our rather cynical age, people frequently ask: “Is there really anything left to explore or discover … hasn’t it all been done before?”

Spend some time with Blackheath ecologist Wyn Jones and you’ll soon have your answer … you’ll begin to feel the welling up of curiosity, excitement and anticipation that must have driven explorers, from the beginning of time, to head out into the unknown.

Wyn’s no stranger to new discoveries. In 1994, when David Noble was canyoning and discovered the ancient living fossil species, the Wollemi Pine, he brought back a branch to show Wyn and together they returned to the relic grove of prehistoric rainforest in the Wollemi Park to learn more about it. Wyn’s also discovered the only seven locations of the very rare Dwarf Mountain Pine, which only exists on the escarpment between Wentworth Falls and Katoomba. 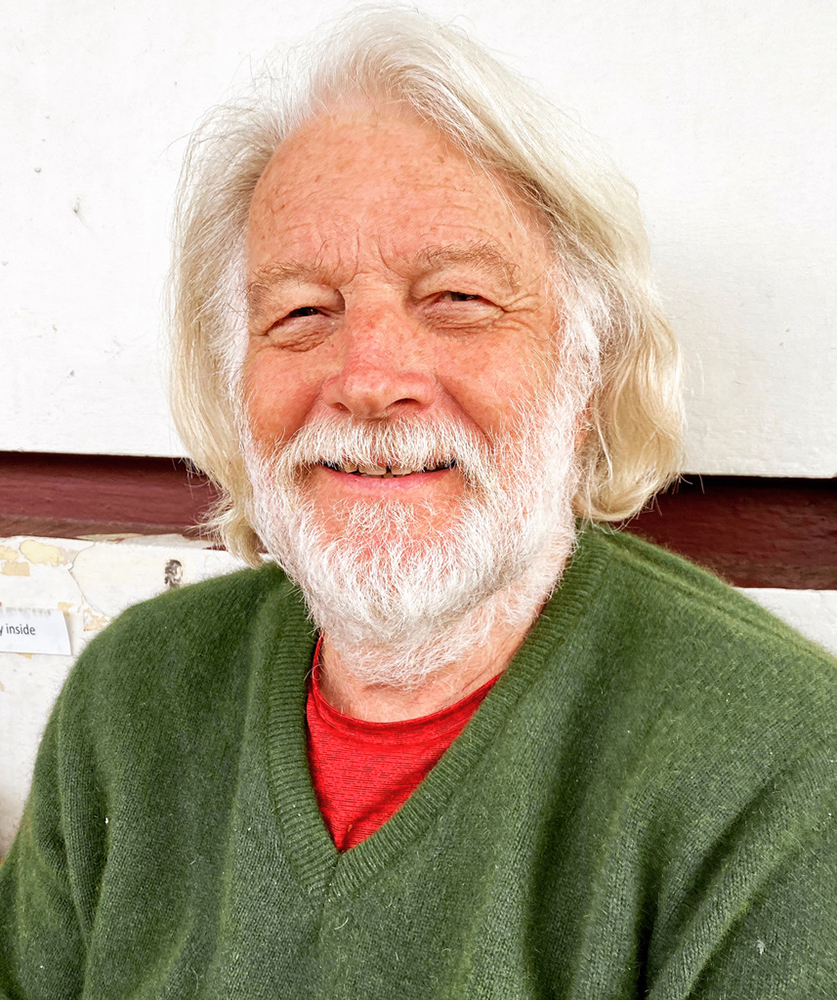 Wyn’s enthusiasm for the natural world, and all that’s still left to explore, particularly in the Blue Mountains, is completely and utterly infectious. You’ll soon be itching to pull on your boots and head out into the bush, ready to be blown away by its mysteries and the mind-bending journeys that can be made into ‘Deep Time’. Go with Wyn to Perry’s Lookdown in Blackheath, for example, and he’ll direct your attention to Mount Banks Wall, where he can identify the geological layers going back 290 million years (about 5.5% of earth time from its formation around 4.5 billion years ago).

Heading out into the bush is what Wyn does frequently. He’s a renowned bushwalker and believes that walking is the only way to truly explore. According to Wyn: “If you walk, you have time to engage, instead of seeing everything in a blur. You take in places at a deeper level and have a much more connected experience with the landscape, and people, both past and present.”

Four years ago, fellow ecologist Dr David Goldney asked him to get involved in a massive project – creating the Great Western Walk across the World Heritage Listed Blue Mountains, from Emu Ford on the Nepean River at Emu Plains, to Bathurst, Australian’s first inland European settlement. It’s a 200km walk that loosely follows Cox’s Road, the first inland European road (or bush track really), which was commissioned by Governor Macquarie and built by William Cox over 6 months from 1814 to 1815.

As a passionate ecologist, geologist, naturalist, artist and lover of history, Wyn saw this as a great opportunity to make the bush, and both its natural and cultural history, accessible to everyone.

It is hoped that The Great Western Walk will launch in 2018. Dame Marie Bashir AD, CVO has become the patron, brochures are being produced, and the Cox’s Road Dreaming Guide Book, which was produced in 2015 by David Goldney and Greening Bathurst, and won the 2017 Chifley Heritage Award in May, is already being widely distributed.

Its sub-title is, aptly, ‘History With Your Boots On.’

The 100 page book, accompanied by eight maps, was produced by over 60 people and provides information about 116 sites and their natural and cultural significance. It brings together stories of the three Aboriginal nations (the Darug, Gundungurra and Wiradjuri) who first walked this land, and who used the Blue Mountains ridge as a meeting ground; the stories of the Europeans; and the stories of the flora and fauna of the region.

For the project, Wyn contributed his photographs, wrote articles, and helped to create maps of the geology and the plant communities along Cox’s Road. By comparing these maps you can see how the underlying geology of an area influences the species that survive there.

The Guide Book includes a chart that shows at what altitude you can find each of the 17 dominant eucalyptus species between the base of Mt York and the Nepean River. This year, Wyn’s also been recording the times that each eucalypt along the road flowers, with the yellow bloodwood starting the season in Spring. The Blue Mountains received its World Heritage Listing predominantly because of being home to 96 species of eucalypts which make up 13% of all gums in Australia.

At Springwood, 10 to 12 dominant eucalypts grow near the old Cox’s Rd and the Guide Book highly recommends taking the time to walk the Reserve track to get a ‘feel’ for what this country looked like in 1814. 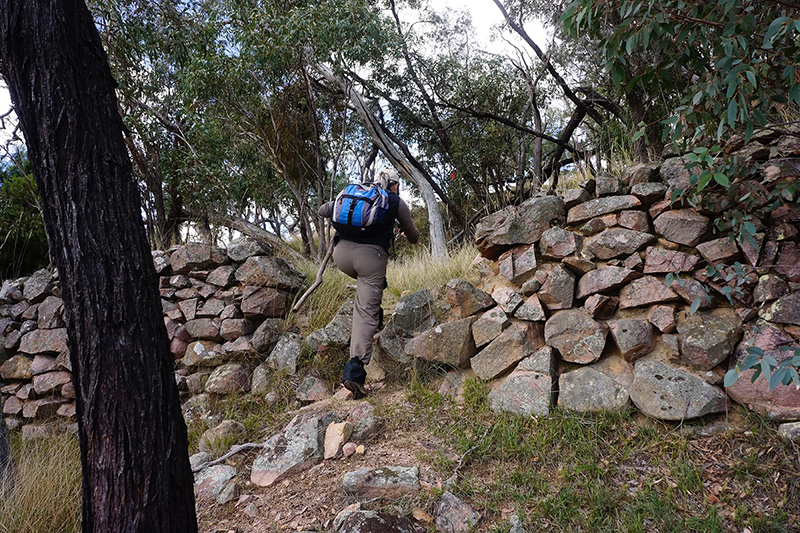 Excitingly, because of his walking and re-walking of the ‘track’, Wyn’s also discovered “500 m of the original road that no-one’s found before! It was in incredible condition because it hasn’t been driven or ridden on, just walked on by horses and cattle”.

There are many fascinating notes that accompany each of the sites in the Guide Book, as it takes you back and forth on a journey through time and space. 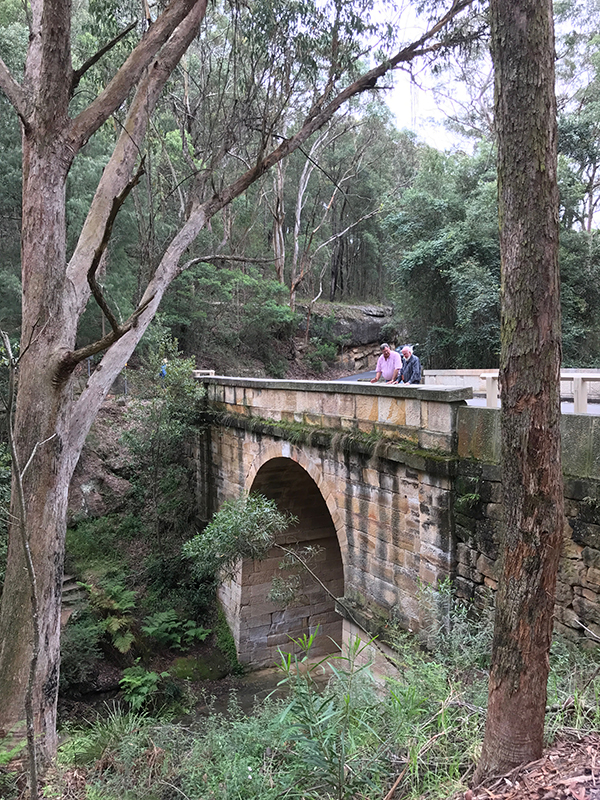 The magnificent Lennox Bridge, for example, is Australia’s oldest surviving bridge and was the first scientifically designed stone-arch bridge on the Australian mainland, built by a team of 20 convicts under the personal tutelage of David Lennox, who trained in Scotland under Thomas Telford, the father of civil engineering.

The Glenbrook Lagoon became an important camping site for explorers, road builders, soldiers, bullockies, viceregal parties, police, squatters, new settlers, goldminers, and convicts. The author muses that it must have been an important place for Aboriginal people too, although no archaeological work has been undertaken there yet. It’s an extraordinary haven of biodiversity, with four native fish, three frog species, two native turtles and three other reptile species, 46 native bird species and 18 mammal species. There’s an intriguing discussion in this section about why early naturalists didn’t record hearing the sound of frogs. When the author was there, he “was greeted with the raucous croaking of at least five species”. He imagines there could have been a dozen or more species in 1815, which would have been deafening!

The Great Western Walk is planning to start from the new Green Bridge being built on the Nepean River. This will be one of the largest pedestrian/cycling bridges in Australia with a 200 m uninterrupted span and a full width of 257 m. It is expected to open in 2018.

While the whole Walk takes about two weeks for those of moderate fitness, it has been designed to cater for all levels of ability and interest, with people being able to dip in and out at various sections using assisted transport.

According to Wyn, “an 80 year old walked most of the way along Cox’s Rd between Mt York and the Great Divide”. The Walk takes roughly one week from Emu Plains to Mt York and then a week from Mt York to Bathurst. The route traverses wilderness, urban, village and rural environments; it travels across sandstone and granite country; it includes panoramic views and both east-flowing and west-flowing rivers; as well as hanging swamps, waterfalls and what were once swampy meadows, where Aboriginals sourced the grasses they ground up for food.

Wyn believes the Walk will attract international attention and give a much-needed boost to local economies, with the growth of B&Bs and other tourism operations.

It’s impossible to not get really excited by Wyn’s vision – a vision in which 10,000 people a year take the time to slow down and reconnect with nature, history, culture and local communities – and ultimately, of course, themselves, and their place on this little layer of ‘Deep Time’.

All that’s left to complete the project is to put up signage, clear pathways, create legal access routes through privately-owned land west of Mt York, and get council support to maintain tracks. With a committee representing a broad range of community groups from Bathurst to Penrith, and including Wyn Jones, none of these obstacles feel insurmountable!

You can find out more at www.coxsroaddreaming.org.au

Photo above: Signage by Lithgow City Council and National Trust, by Wyn Jones