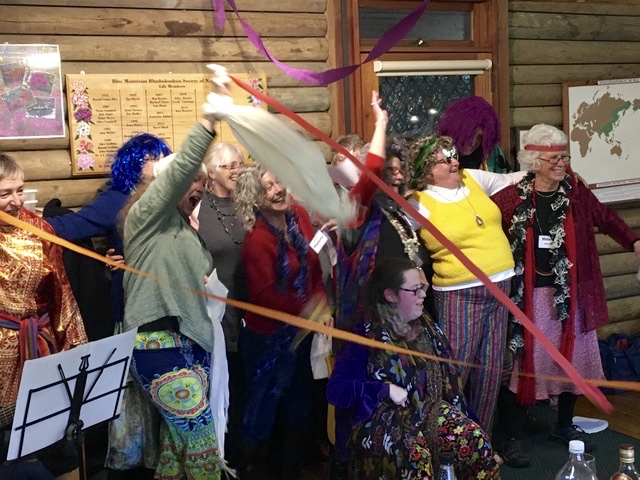 Sopranos sing ’Thank you for the Music’.

In a 2015 study, singing in a choir was demonstrated to be one of the quickest ways to bond a group of strangers, and community singing was identified as an ideal way to improve broader social networks, especially in an era when so many feel isolated or alienated.

The fact that Blackheath has at least four choirs, undoubtedly contributes to the strong camaraderie of this small village, which is home to what’s been described as the ‘friendliest choir festival in the world’.

The Heathens Community Choir, which began in the back room at Blackheath Area Neighbourhood Centre in 2009, and has been supported by BANC ever since, now boasts over sixty ‘very friendly’ members.  It celebrated its 10th birthday on Wednesday 5 June this year at the Blackheath Rhododendron Gardens, and also celebrated the birthday of the choir’s oldest member, Harry Douglas, who turned 93! 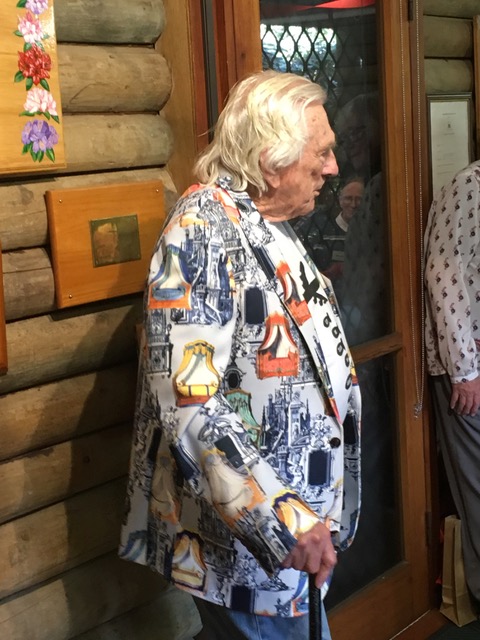 Much-loved choir leader Christine Wheeler began the choir shortly after she moved to Blackheath and answered an advertisement for a choir leader in the BANC newsletter. She is passionate about the role of the choir in the community. “It’s become like a great big family, with a lot of people looking out for a lot of other people,” she says. 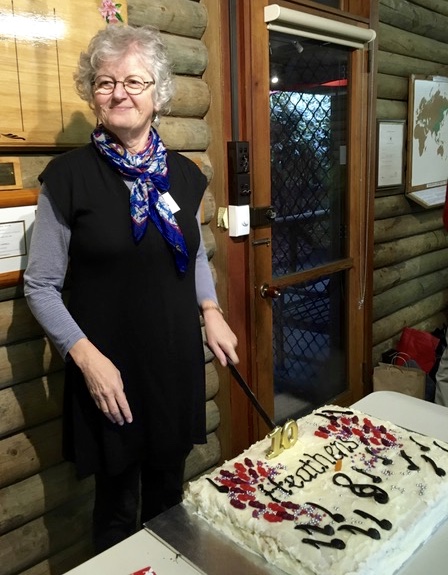 Each part of the choir added to the birthday festivities by contributing a performance, proving that many of them are also multi-talented musicians. 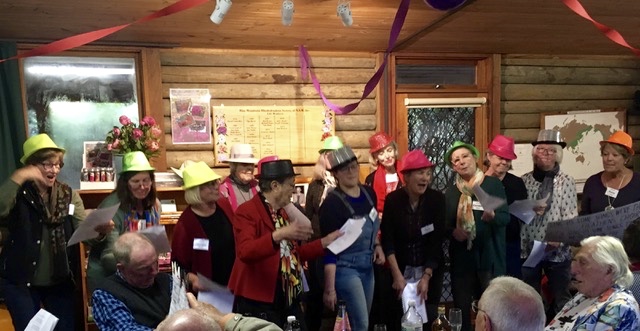 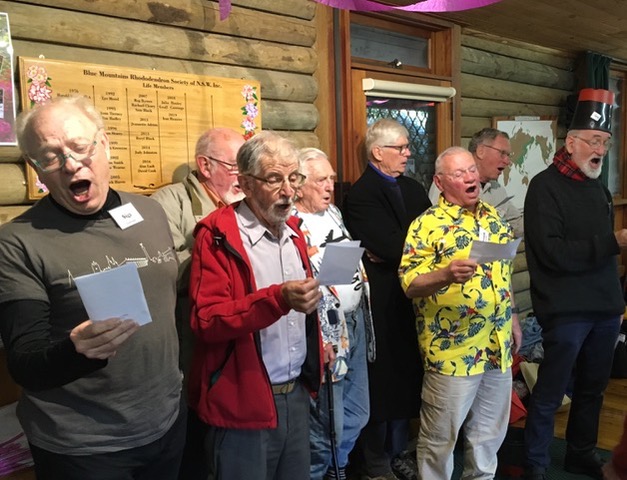 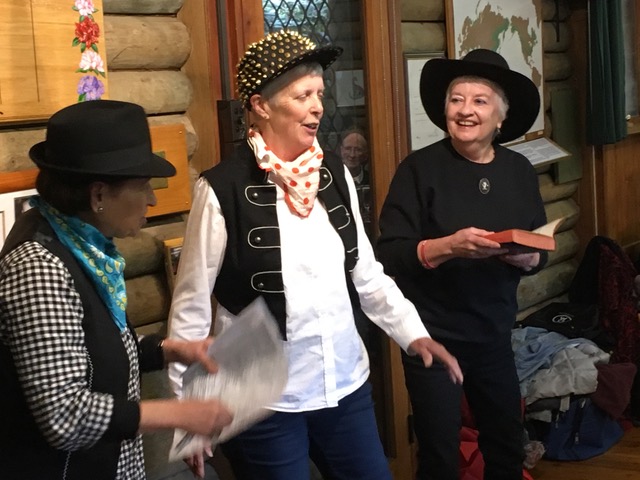 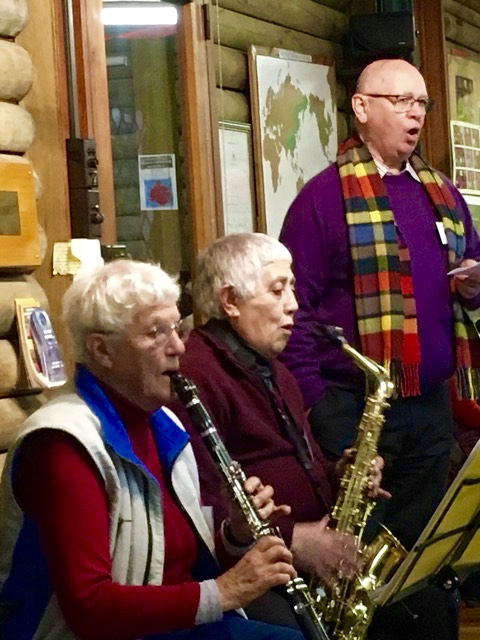 Margaret Hamilton, one of the choir members, loves the fact that once a week she can switch off from the stresses of working life to ‘escape in music’ and connect with other people in Blackheath. Her husband loves her being in the choir even more! “I often leave home cranky because of work, and come home singing”, she says with a laugh.

“I also love the fact that we support and raise funds for some very important causes. Last year, for example, we were part of a concert that raised around $10,000 for the Blue Mountains Refugee Support Group,” she said.

“We’re also very excited about a concert we’re organising in Blackheath Community Hall called Bulgamada, or Mountain Water,” Margaret added. To be held on Saturday 24th August, it’s a ‘big sing’ which will celebrate Indigenous history through story and song. Glenn Skuthorpe, Jacinta Tobin and Lexodious Dadd will also be peforming and anyone can join the choir to be part of it. Choir rehearsals will be held on Sunday 30 June and Sunday 28 July. 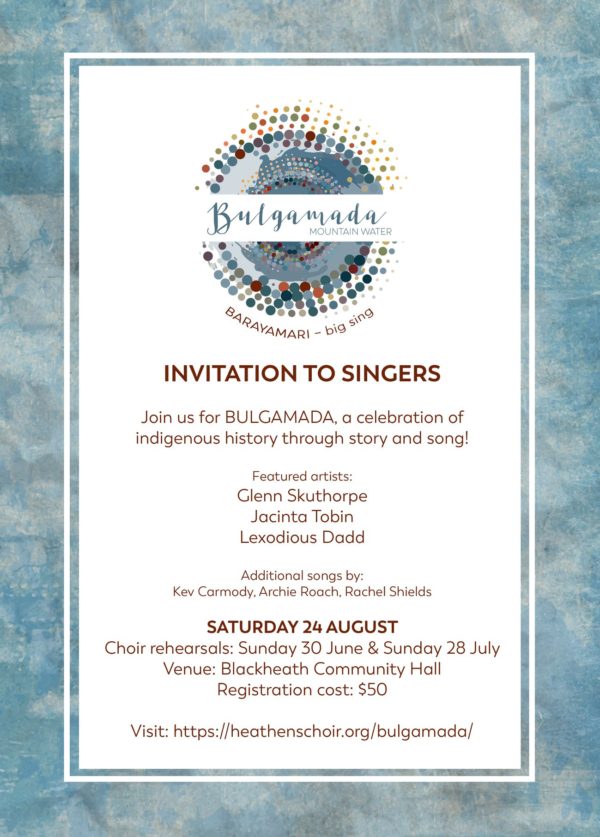 Regular weekly choir rehearsals of folk, world and popular music arrangements take place in the Bates Hall (Blackheath Community Centre, corner of Gardiner Crescent and the Great Western Highway) every Wednesday at 2pm during the school term. You don’t need to audition and you can just come along to join the choir.

Other choirs in Blackheath include:

View the community calendar for times and venues.

Mick and the PhatMan Talking Music