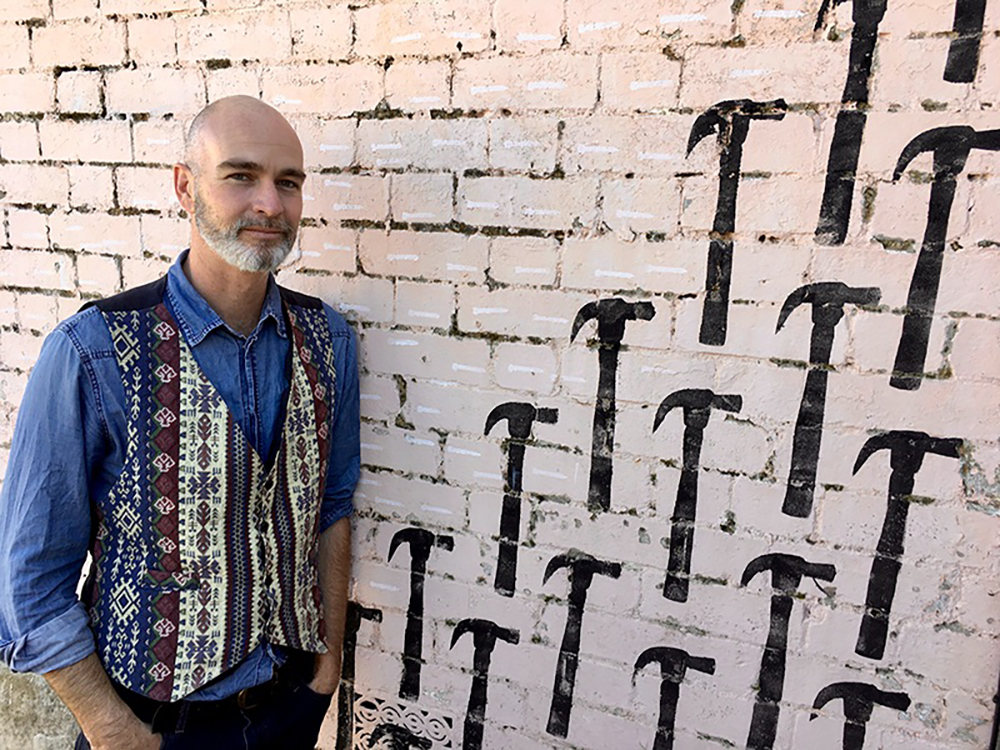 Remember when NASA launched the Hubble and the astronauts had everything they needed EXCEPT a crowbar? That’s the philosophy driving Justin Morrissey and the Katoomba Toolo: if you are out there doing a creative project, you should be able to get your hands on any tool you need.

Toolo is a Library of Things, with everything owned by the collective who are creating a sharing community and activating the space in Froma Lane, Katoomba.

Justin has always had his own makerspace, most recently in the Queensland TAFE Creative Arts & Entertainment building in Brisbane. After moving to the Mountains, he felt isolated from a ‘making community’. He tried the Men’s Shed, but wanted a space that was also accessible to women. A space that would connect the local creative community, and save them money and time.

Toolo aims to encompass all creative practice, and to have tools to support all types of creative projects. It runs safety workshops, which are mostly attended by women, and teaches members how to use tools. Under construction is a metadata schema, basically an app, so that anyone can plug into a Toolo inventory. It will track borrowing and bookings, sending automatic notifications when an item is overdue.

There are more than 350 tested and tagged items on offer – check out the inventory on the website at www.toolo.com.au. Frequent user Simon Hearn has borrowed everything from a mitre saw box to a whipper snipper to an electric kiln – expensive items that aren’t used often enough for him to justify buying his own, but are essential for completing his projects. Kelly Heylen borrowed everything she needed from Toolo to fit out her new business, Platform Gallery in Katoomba.

The most popular items are the PA system and the audiovisual gear. Are you putting on a show? Toolo can lend you the video gear to record it for posterity, or set up a home recording studio and then sell the DVD of it. For your other needs, there are chainsaws, lawnmowers, marquees, camping gear – all of it donated and maintained by Toolo volunteers. Hire-length is worked out on a case-by-case basis.

The aim is to spend 2.5% of Toolo’s annual income on buying new tools. If you have tools you’d like to donate, visit the website to see the wishlist.

As well as ‘things’, Toolo provides studio space for artists. Currently there are three studios available for $55 per week. Toolo extends an open invitation to all artists to drop in and find out how Toolo can facilitate their projects.

Justin believes we need a shift in consciousness about sharing and we need to grow a sharing economy – something that is already happening in Denmark, for example.

Danish Makerspaces provide accommodation, with the elderly and kindergartens all in one space. Older people, no longer socially isolated, know how to use tools and how to raise children; younger people have an intergenerational community to live and raise a family in – it’s a perfect match.

There is one other Tool Library in Australia, in Brunswick, which is part-funded by Moreland Council.

To set up your own Toolo, Justin advises having a core group of at least five people who are committed to coming in every week to open up, do tool maintenance, run fundraisers etc. The other vital ingredient is a financial strategy. Toolo started with enough capital to cover one year’s rent, the insurance and all the legal and online costs of setting up a not-for-profit company.

The goal is to become self-sustaining within two years. That would require 150 members. With 64 members and more coming in every week, Justin is hopeful that Toolo will reach 75 members by the halfway point, July 23rd 2017, and 150 by the end of Year 2.

If Justin had a hammer (and he does) he’d be building a Toolo in every town and suburb across Australia.

“Community solutions tend to drive change, so it’s up to us to create in the community the changes we’d like to see in the wider world,” he says.