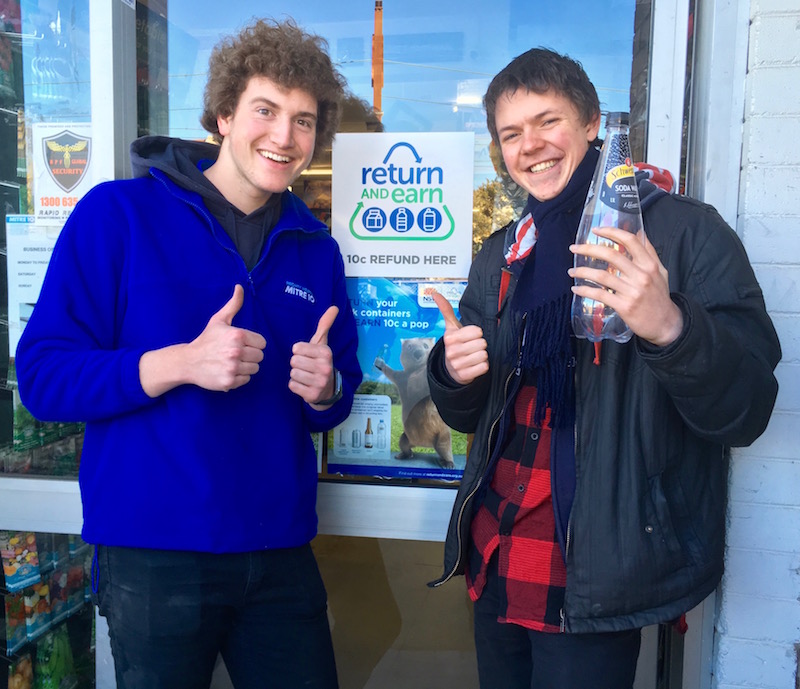 Blackheath businesses have been proactive in the ‘War on Waste’. In 2016, Blackheath became the world’s first town to agree to phase out plastic straws – still a ‘work in progress’. The community and businesses have also supported Boomerang Bags and are working to reduce the use of plastic bags. To tackle organic waste, the Wattle Cafe, Blackheath General Store, the Piedmont Restaurant and the Vispassana Centre have been composting their food scraps; and during Plastic-Free July the Victory Theatre Cafe and Altitude Deli have been urging customers to go Topless in July to avoid the use of plastic tops on cups. They’ve been supported by Keith Rowe & Kayo Yokoyama’s Glass Gallery, photographer Neil Stevenson and Century 21 Real Estate. The Victory Theatre Cafe has even commissioned local ceramic artist Anthony Brink to produce a beautiful ceramic keep cup.

To support the community in being able to tackle container recycling, Blackheath’s Mitre 10 has become an Earn and Return, Over the Counter site. For every container brought in to Mitre 10 Blackheath, whether it’s a can, beer or soda bottle, or even a milk carton, you can earn 10 cents. Mitre 10 has also been a major supporter of Blackheath Community Farm. This helps the Farm continue its composting program for local organic waste.

To find out more, visit Blackheath Chamber of Commerce at: facebook.com/BlackheathCC

Jack Coggins reports on Return and Earn in NSW

Prior to the 1970s, when drink manufacturers would reclaim and refill bottles, returning used drink containers to stores was common practice. When the mass shift to single-use containers came, South Australia founded their Container Deposit Scheme (CDS),

to encourage the reduction of litter with a small 10 cent reward for each bottle returned. 40 years after its inception in 1977, nearly 80% of drink containers sold in SA are returned for recycling.

Now it’s New South Wales’ turn. The Return and Earn program began as part of the ongoing goal to reduce the amount of litter in NSW, of which drink containers make up 44%. Similar to the CDS, eligible bottles, cans and cartons can be turned in for a 10 cent refund. Glass, plastic, aluminium, steel, and liquid paperboard containers are all accepted, providing that they are empty, in good condition and still have their labels attached.

There are several ways that containers can be returned, the most common of which is through ‘over the counter’ sites – local businesses that will collect your used bottles and offer cash refunds. The next most common way of returning is through a Reverse Vending Machine (RVM), which basically does what it says on the tin: bottles go in, money comes out. The machines will refund either a cash voucher – which can be spent or swapped for cash at participating retailers – or an electronic transfer via the myTOMRA app, which can be connected to a PayPal account. There is also the option to donate your refund to a selected charity. ‘Donation stations’ are similar, but only offer the donation option.

Finally, there are also staffed centres for bulk container return offering either electronic transfer or cash refund. In total, there are currently over 600 return points across NSW.

So, ready to get earning? Listed below are some of the return points for our region: